How many times have we wondered if all is lost? We are human; we have emotions, so hopelessness and helplessness are bound to creep in from time to time.

The dangerous part is when we allow our emotions to take hold of us and take us down a road of despair- down the rabbit hole of darkness. In these times of anguish, try to find the positives! Find the yeses and look for the miracles that do happen. We all have a story, one from the past, or one that is still developing- but either way, this conjures up raw emotions.

What are we looking for?

Hopelessness, a subject I think of often. My constant hope is to find hopeful situations for myself and for others. I often think to myself, ‘If only we could see the joy, see the dance within the darkness. If only we could see the whole picture that is a masterpiece.’ But the truth of the matter is that while we are living out the strokes, it’s hard- impossible even.

There are so many reasons for hopelessness. Sometimes we feel the feels without even knowing why. The key to this is asking yourself and finding the answer- finding the root cause. Physically take the time to think about your thinking. What is the reason and what is the possible solution? Maybe the solution is talking to a close friend or family member; the best solution might be talking to a professional. There is no need to stay in your place of despair, know that hopelessness is not your home. You have a choice: walk through the fire and do not allow it to consume you! Never even have to carry the scars with you! Learning through the experience and moving on to greener, happier pastures: wiser, healthier, and happier from the experience!

Lord of the Flies

I love to encourage and empower: that is me! Sometimes, in life, we are gob-smacked and stumped for the answer. One of these experiences for me was reading the school assigned 1954 novel, ‘Lord of the Flies’ written by William Golding. This novel cut me to the core. I must honestly say that I hated it. From a teacher’s standpoint, there is a lot of merit behind the novel. There is much to discuss, all the underlying themes, characters and symbols. I’m sure that, for some, the novel reflects the opposite of mine and that it is rather a reflection of faith in humanity. A faith, in order and in democracy. An understanding that we all have the innate ability to behave unruly and uncivilized, but that it is law and order that always prevails. Unfortunately, at the tender age of 14, this was not the case for me. 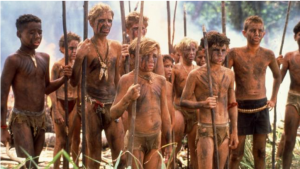 This was all during my horrible teenage years, a period in time that I never want to repeat. So, while all these teenage emotions were running riot and rampage through my body and life, having to study the hardships of ‘Lord of the Flies’ only confirmed for me that, at our core, we are evil and, given the opportunity, we would revert to our savage nature. What a thing for a child to try and comprehend. Looking back, it’s not that the message is altogether terrible, for me it just could have been coupled with more hope.

A road not to go down.

Without opening the proverbial can of worms about humankind and the sinful nature… Yes, we have evil in the world. Yes, some people’s behaviour is truly evil.

What I felt was so painful about reading this novel was that it ended there. It ended with Golding’s negative view on life and that was the conclusion for me. It stuck with me, unfortunately. Like so much in life, the picture that is painted ends up sticking with us. I later learned that Golding was awarded numerous prizes for his novel, won the Nobel Prize in literature in 1983 and was knighted and hailed as a mastermind. And, like many, a troubled soul whose novels depicted possibly his own emotions and his story.

Currently, since COVID-19 has hit the world over, we are seeing humanity with fresh eyes. We have seen generosity and support, that was lacking before. Seeing a flavour emerging from the world that is sweet and kind. Thankfulness is bursting forth and touching all corners.

Yesterday, I came across an article in The Guardian: ‘The real Lord of the Flies’. This was the exact answer I was looking for. I wished we had been given this account! What a stunner! I cried reading the true account and it made me so happy and hopeful for mankind.

The true-life story of Lord of the Flies!

It goes as follows… in June 1965, six boys from a strict Catholic boarding school in Nuku‘alofa Tonga, an island in the South Pacific, were bored at school and decided to run away. The oldest was 16; the youngest 13. They stole a boat and set sail for Fiji, some 500 miles away, or even all the way to New Zealand. Their plan didn’t go accordingly; they soon found themselves swept away in a storm, where they drifted for days on end. With almost no food or water, they managed to survive, until -finally- they came upon an uninhabited island.

Uninhabited for a reason: it was not picturesque and was laden with sheer rocks and cliffs. It had once been inhabited by a tribe that was captured by a slave ship, so this allowed the boys to use what had been left behind. An excerpt from the article explains how they survived the 15 months until they were rescued by a passing ship. “The boys had set up a small commune with food garden, hollowed-out tree trunks to store rainwater, a gymnasium with curious weights, a badminton court, chicken pens and a permanent fire, all from handiwork, an old knife blade and much determination. While the boys in Lord of the Flies come to blows over the fire, those in this real-life version tended their flame so it never went out, for more than a year.

A system that worked

The kids agreed to work in teams of two, drawing up a strict roster for garden, kitchen, and guard duty. Sometimes they quarrelled, but whenever that happened they solved it by imposing a time-out. Their days began and ended with song and prayer. One boy fashioned a makeshift guitar from a piece of driftwood, half a coconut shell and six steel wires salvaged from their wrecked boat – an instrument the captain kept all these years – and played it to help lift their spirits. And their spirits needed lifting. All summer long it hardly rained, driving the boys frantic with thirst. They tried constructing a raft in order to leave the island, but it fell apart in the crashing surf.

Worst of all, one slipped one day, fell off a cliff and broke his leg. The other boys picked their way down after him and then helped him back up to the top. They set his leg using sticks and leaves. “Don’t worry,” Sione joked. “We’ll do your work, while you lie there like King Taufa‘ahau Tupou himself!”

There is always a silver lining

They survived initially on fish, coconuts, tame birds (they drank the blood as well as eating the meat); seabird eggs were sucked dry. Later, when they got to the top of the island, they found an ancient volcanic crater, where people had lived a century before. There the boys discovered wild taro, bananas and chickens (which had been reproducing for the 100 years since the last Tongans had left).

They were finally rescued on Sunday 11 September 1966.”

The real Lord of the Flies. Where hope prevails.

It’s stories like these that remind us that mankind is good. Yes, there is evil- but there is so much better. This story, for me, once again reinforced that miracles do happen. Good can win and we can live in the hope that kindness, honesty, goodness and justice are real and we can hold the torch to seeing it prevail. We need to stand on the side of the good- believing and having faith that God has a plan and His plan will win.

My passion is people and healing! My purpose is to help as many people as I can, and normalize therapy of all forms. My journey hasn't always been an easy one; as a child, I was diagnosed with a number of learning disabilities, which meant many hours of therapy. Of which I will always be grateful for. I went on to study marketing and business, during this time, I went through a massive life change. Questioning every decision I had made up to that point, which led me onto a road of self-discovery, church and the bible. Losing 25kg and exploring a new way of doing life, I grew some wings and explored the world. Spending a couple of years working in the sales department for an 'off-plan property investment company', in London. Afterwhich coming back to South Africa to marry the man of my youth, where we now share in the joy of raising our crazy brood of 4 little boys on a farm in rural South Africa. After a series of life events, and seeking the counsel of a therapist in order to find my own personal healing. This journey, leading me to pick up the books again and study, Career Guidance Counselling. All of this helped propel my passion of Mental Health and Physical Wellness. It was through a conversation, in 2019, with my darling friend Jess, in which we hatched up the concept of 'Online Therapy of all forms - Mind, Body and Wellness.' At this point, it had not been done before, and therefore we couldn't walk away. This is where it started, we co-founded and now co-own Connectable Life- making mental health and wellness easy, accessible and stigma-free. Our goal is to make, 'the therapy space,' accessible to all who need it. Highlighting the power of healing for everyone, wellness over illness.

Is it really abusive behaviour?

The Empath’s Guide to Saying No to People

Sugar and health, understanding insulin in the body

Do I need therapy?

If you are in a life-threatening situation, please do not use this site. Crisis helplines are listed in our website for all countries, please click on the button to find yours.
Helplines